After many months away from the Australian Ranking tournament scene, LifeTime players have recorded exceptional results throughout January. From the perspective of the coaching staff, they’ve been inspired seeing the player’s hard work pay off. With results like this being seen in early January, 2021 is shaping up to be a very promising year on the tournament court. 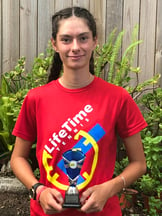 🏆2021 Metropolitan Regional Assembly Teams Competition🏆
It was great to see so many players take the court for 2021s first team event of the year. With an emphasis on team spirit and environment being placed on the event, the way players took up those challenges and made it into a team event, not just another tennis tournament was special. The support for their teammates, giving each tips between matches and competed was an incredible sight that you can't find at regular tournaments. With over 40 LifeTime players competing in the event, it is without a doubt their play and conduct was exceptional. Another challenge that players faced was the high volume of tennis in a short period. Although it was tough, everyone rose up to the challenge and performed to a high level. Well done to everyone who competed!

Stay tuned for more results over the summer of 2020/21 from our players!

Our blog is a collection of articles written by our lead coaching team and sports science industry leaders. The primary aim of this blog is to help educate and stimulate thought in tennis players.